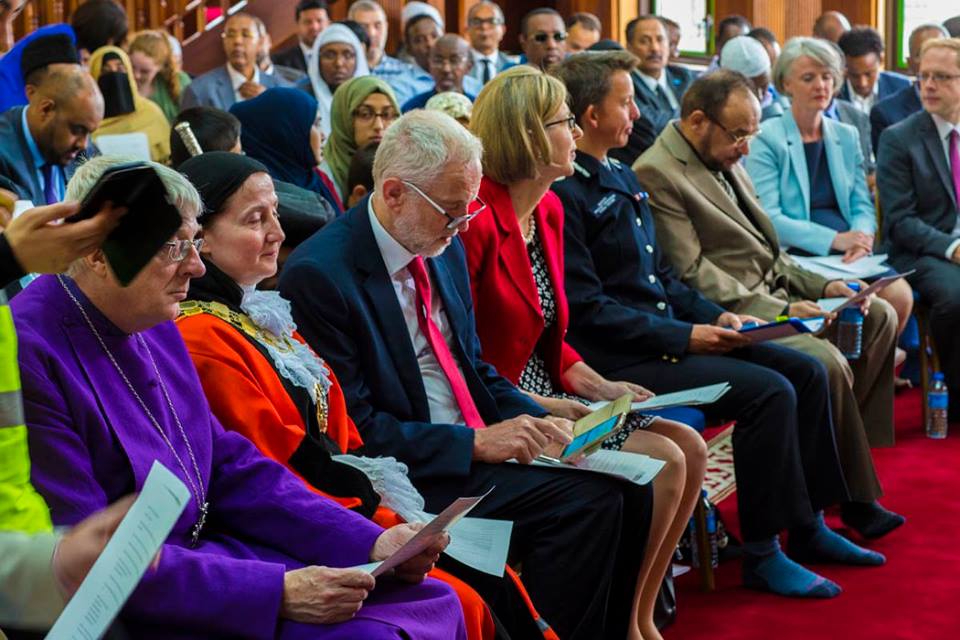 Finsbury Park Mosque and Muslim Welfare House held a memorial service today to remember the victims of the terrorist attack which took place two weeks ago, especially Makram Ali who was tragically killed on 19 June in the Finsbury Park area after worshippers were leaving the two mosques after late night prayers.

Titled, A Service of Hope, the memorial event was attended by a cross-section of the community including interfaith leaders, politicians, the emergency services, and family members representing the victims.

Ragad Altikriti, the host of the memorial service, said “at difficult times like these, it is immensely important for our government to act swiftly to strengthen community relations and ensure that every life matters and that the actions taken are equal, with no differentiation between one victim and another.”

Mohammed Kozbar, Chairman and Director of Finsbury Park Mosque read out a statement from both mosques. To the victims, he said “we can’t imagine the pain and loss you feel; but our thoughts and prayers are with you – and we are here for you.” He thanked the Emergency Services for their help and support over the past few days as well as national leaders including visits by PM Theresa May; Sadiq Khan Mayor of London; members of the Royal Family; Labour Party leader Jeremy Corbyn.

Kozbar lamented the fact that despite strenuous efforts by the Muslim community to confront extremism including the ouster from this mosque of Abu Hamza and his extremist followers 13 years ago, as well as advancing dialogue and understanding between communities, “the image of Islam continues to be tarnished and distorted, through a sustained effort to brand and conflate Islam with terrorism. This effort has been largely successful, to the extent that the media and some politicians speak about what they term as ‘Islamic terrorism’”. He added, “it is imperative that we openly discuss the factors that drive young Muslims to terrorism, without fear of being charged with sympathising or justifying those acts of barbaric criminality. Unless we do so, we will forever be fighting fires, rather than extinguishing the original flame”.

Harun Rashid Khan, Secretary-General of the Muslim Council of Britain, expressing shock at the tragic event during the holy month of Ramadan said “we come together when these kinds of things happen as those who seek to sow hatred and division are clearly failing”.

Deputy Mayor for Policing and Crime Sophie Lindon said “terrorism is terrorism no matter what motivation or who the perpetrators are”. She commended the efforts of the Finsbury Park Mosque and the Muslim Welfare House in their handling of this incident, and in particular, described Imam Mohammed from the latter as “a true inspiration for us all” as he and others risked their lives apprehending the attacker.

In her second visit to the Finsbury Park Mosque, Sarah Newton, MP and Parliamentary Under Secretary of State for Vulnerability, Safeguarding and Counter Extremism, said she was “struck by the strength of this community and how it works together in unity” and that “it has never been more important for the nation to stand together against those who seek to divide”. She further added, “our prayers are for Makram Ali and family and the heroes at the mosque who intervened and acted so bravely to make sure that calm and unity prevailed”.

In his speech, the Acting Bishop of London Bishop Pete Broadbent was critical of some sections of the media and politicians: “we need to resist and counter some of what politicians and media say – that our problems arise from a result of immigration and religion, etc. There needs to be a counter-narrative where we rejoice in the richness and diversity of our society. The problem is not in the ‘other’ (migrants, faith) but prejudicial bile that comes out of some media outlets”.

Islington Council leader, Cllr Richard Watts, reiterated that the attack in Finsbury was “clearly an act of terrorism” and he thanked the Muslim community for the strength and forbearance on the night — and the bravery and strength of character in stopping further terrorism”.

Fiona Taylor, Temporary Assistant Commissioner condemned the attack and sent her condolences to Makram Ali and everyone injured. She reassured all that “we will seek justice for Mr Ali and efforts are underway” because “an attack on one is an attack on us all”. She said she recognises the damaging effects this has on victims and community at large.

Shah Islam, representing the families of Makram Ali and other victims, said “We have lost a husband, father and grandfather” and that the attack was “a clear manifestation of hate crime and Islamophobia”. But despite this, “as victims, we hold no grudges against others as our religion teaches love and peace; for indeed we are best as humans when we build bridges, not walls”.

Jeremy Corbyn, leader of Her Majesty’s Official Opposition and local MP, said “the legacy of Makram Ali is that we all stand together united” and that the “attack which sought to divide us will never succeed”. Saying he is proud to represent this area and the work of Finsbury Park Mosque, he called on all to “challenge racism in all its forms; if we don’t then we start the process of an unfair and unjust society”.

The service ended with a short prayer led by Imam Dr Omer Elhamdoon.