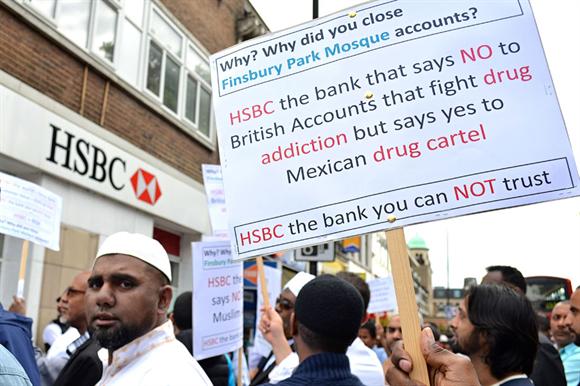 8 August 2014 by Susannah Birkwood, Be the First to Comment

Three hundred people protested outside a north London HSBC branch, according to the Islington Gazette; the protesters claim the bank has given them no reason for closing the mosque’s bank account

Worshippers from Finsbury Park Mosque have staged a demonstration outside their local branch of HSBC in London to protest against the bank’s decision to close the charity’s bank account.

According to the Islington Gazette newspaper, about 300 people participated in the protest, which took place on Friday outside the HSBC branch on Seven Sisters Road in north London.

Khalid Oumar, a trustee of the mosque, said the protest was held because HSBC had not given the charity any reasons for its decision to send a letter saying the mosque’s account would be closed – except for saying that its activities now fell outside the bank’s “risk appetite”.

“It is important that Londoners and the whole country are informed about this baseless decision,” Oumar said in a statement.

Oumar told the Islington Gazette that the charity had received a second letter from HSBC saying the bank’s decision was not based on religion or race.
Protesters held placards with slogans including: “HSBC, the bank you cannot trust.”

Finsbury Park Mosque works with the Muslim community in Islington and surrounding boroughs to promote community cohesion, dialogue and understanding, according to the charity.

Its activities include daily prayers, a youth club, a weekly Islamic supplementary school and fatwa services for the Muslim community, the Charity Commissionwebsite says.

Tom Keatinge, an associate fellow of the Royal United Services Institute, who has done research on the impact of counter-terror finance on NGOs, told Third Sectorthat he expected other NGOs – particularly Muslim ones – to have their bank accounts closed as risk committees reconsidered their client lists in response to developments in the news, such as the Gaza conflict.

“The judgement that banks make are primarily a function of risk and reward,” he said. “A lot of NGOs feel unfairly treated because they have lots of money on deposit with a bank, but the banks aren’t making much money out of them, so they aren’t prepared to take risks they consider to be larger than the rewards they’re earning.”

Keatinge said many banks wanted to avoid being fined for dealing with organisations active in sanctioned countries. In June, BNP Paribas was fined £5.2bn in the US for breaking sanctions against Iran, Sudan and Cuba.

A spokesman for HSBC said in a statement: “HSBC was fined US$1.9bn (£1.1bn) in December 2012 by the US and UK governments and entered into a deferred prosecution agreement. The bank is applying a programme of strategic assessments to all of its businesses.

“As a result of these ongoing reviews, we have ended relationships with business and personal customers in over 70 countries. The services we provide to charities are no exception to this global review.

“We take our responsibilities to customers and society very seriously, and remain committed to supporting our small business and charity customers.”

The National Council for Voluntary Organisations said last week that it planned to convene meetings in the coming weeks with several banks and the Charity Commission to raise the concerns voiced by Muslim charities about the way banks have been treating them.