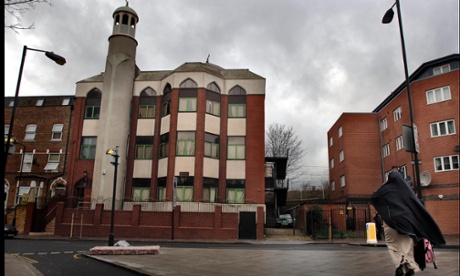 Haroon Siddique: The Guardian, Wednesday 30 July 2014 17.17 BST
The organisations all received near-identical letters from HSBC saying their services fell ‘outside of our risk appetite’

Three Muslim organisations, including the Finsbury Park mosque, are demanding answers from HSBC after being told by the bank that their accounts were being shut down.

The organisations, also including the Ummah Welfare Trust (UWT) and the Cordoba Foundation thinktank, all received near-identical letters from HSBC dated 22 July giving them two months notice and saying their services fell “outside of our risk appetite”.

Khalid Oumar, trustee of Finsbury Park mosque in north London, said: “There’s absolutely no reason given. We want to make sure HSBC is absolutely ashamed of what we believe is an Islamophobic campaign against Muslim organisations. It [the mosque] is a local organisation that raises funds for local activities. We demand to be able to continue to do our work.”

In the late 1990s and early 2000s the mosque became synonymous with the radical cleric Abu Hamza but he was eventually removed. Oumar, who acted as interim manager when it reopened in 2005, said: “We have made great strides over the past 10 years in terms of social cohesion.”

The mosque was described by local MP Jeremy Corbyn on Wednesday as a “wonderful community asset”.

It is not the first time banks have closed the accounts of Muslim organisations. In 2012, UBS closed Islamic Relief’s account prompting the charity to claim banks were generally nervous about anti-terrorism legislation. UWT, an international relief and development charity,previously had its account shut by Barclays in 2008. Trustee Muhammad Ahmad said: “The first time we were served notice [in 2008] was at the time of the first Gaza war. It has to be much more than a coincidence. To serve notice to a charity helping people on the ground [in Gaza], to choose that timing, it beggars belief.”

He said the charity had been receiving over £1m in donations on some days last week due to Ramadan.

The UWT has previously been accused of having links to terrorism after it gave money to UK-based Palestinian charity Interpal between 2004 and 2008, after Interpal was designated by the US treasury as a supporter of Hamas. But Interpal, which Ahmad said UWT no longer deals with, was cleared of any wrongdoing by the UK’s Charity Commission. He called on people to boycott HSBC in the absence of a change of heart or explanation.

Anas Altikriti, chief executive of the Cordoba Foundation, founded to help promote “rapprochement between Islam and the west” also linked HSBC’s decision to Gaza. He, his wife and two children, aged 12 and 16, also received notices from HSBC regarding their personal accounts.

“The only explanation that comes to mind is my work for Palestine and Gaza,” he said. He also encouraged a boycott, urging people to “choose your account before they do”. When in opposition, David Cameron described the Cordoba Foundation as “a front for the Muslim Brotherhood” and in April he ordered a review of the Brotherhood’s links to extremism in the UK. Altikriti, who flew to Iraq in 2005 to try to secure the release of British peace campaigner Norman Kember, who was being held hostage, has denied being a member of the group.