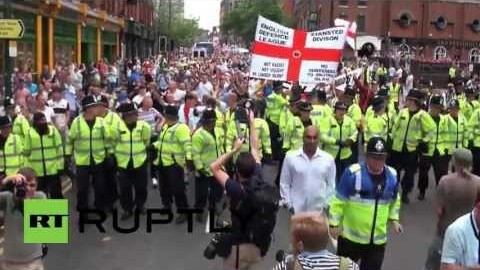 The Muslim Council of Britain condemns in the strongest terms the act of violating a place of worship by the recently formed extreme far right, anti-Muslim group, Britain First. The most recent incident occurred at midday yesterday, where the emboldened action by three middle aged men and woman entered one of the largest Islamic institutions in the country, wearing their shoes and trampling on prayer surfaces to carry out their misguided propaganda. This has left many members of the community angered and disappointed with the inability of the government and the authorities to curtail this type of thuggish behaviour.

The East London Mosque, a local affiliate of the MCB, is a hundred year old institution which has pioneered community cohesion initiatives over decades, and is now one of the largest mosques in the country, providing services to people from all walks of life. Britain First, who are dressed as a militant fringe element of the British National Party recently ‘invaded’ mosques in Bradford and Scotland in a similar way, distributing army bibles and anti child grooming leaflets to worshippers by entering the mosques and demanding to see the Imam. This can be clearly seen in their own You Tube videos.

Everyone is welcome at a mosque, many of which hold open days for new visitors. Visitors are also requested to respectfully adhere to the sacred etiquettes when at a place of worship. The aggressive and intimidating manner in which members of Britain First enter Mosques, is nothing short of sacrilege.

We urge the authorities and the government to urgently reassure our communities that action will be taken to safeguard our places of worship as, up until this time, there has not been any form of public condemnation of this extreme behaviour which threatens the peace in our communities.

Notes to Editors:
The Muslim Council of Britain is the UK’s largest Muslim umbrella body with over
500 affiliated national, regional and local organisations, mosques,
charities and schools.