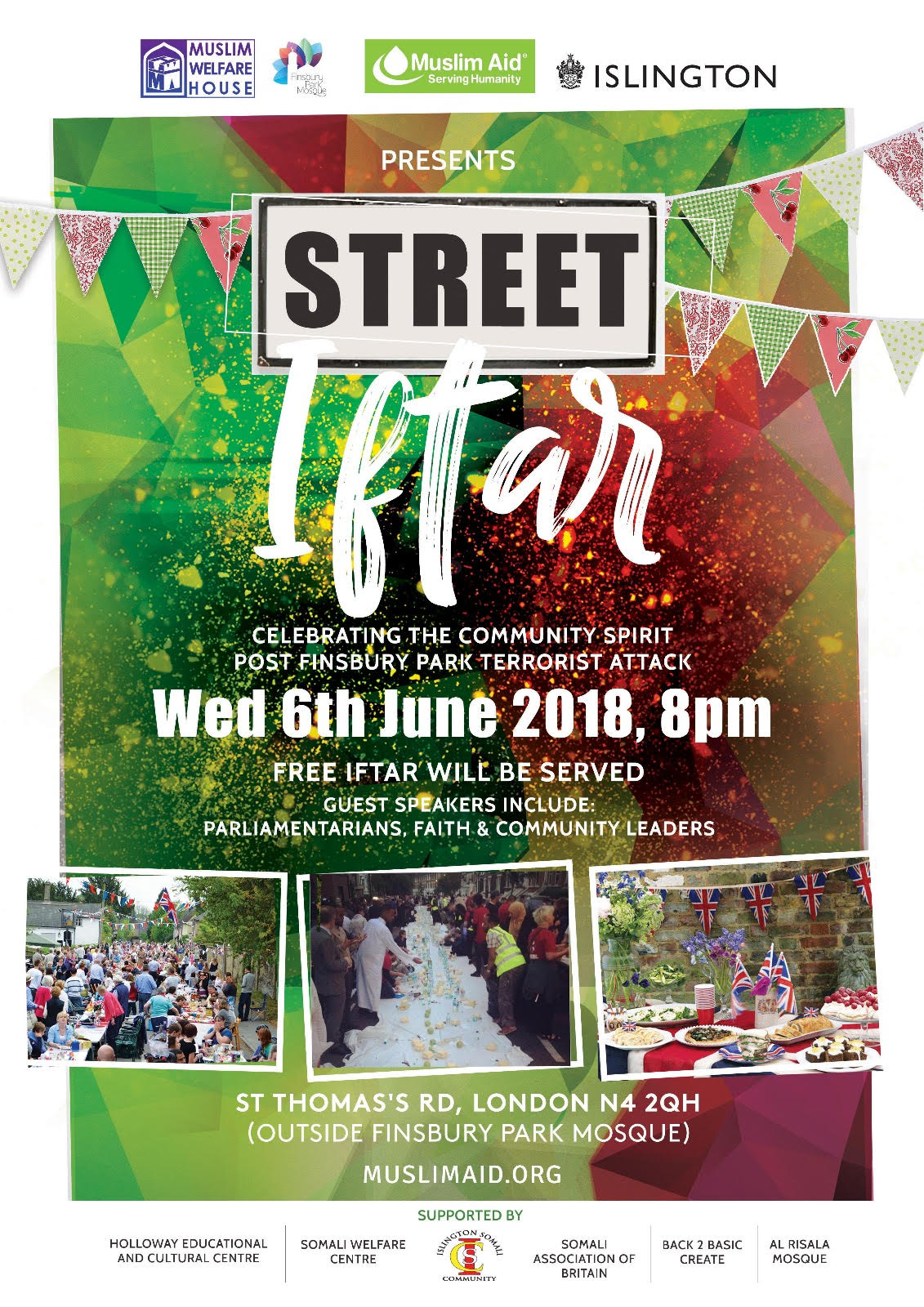 One year on from the Finsbury Park terrorist attack, Jeremy Corbyn, other high- profile parliamentarians and representatives from all faiths will join with the community for a Street Iftar.

The event on Wednesday 6 June is being organised by the Muslim Welfare House, Finsbury Park mosque and the charity Muslim Aid to pay tribute to those affected by the incident but also to celebrate the public spirit following the attack.

The attack which occurred outside the Muslim Welfare House on 19 June 2017, tragically  killed one man and injured eight people  when a van drove into pedestrians. Imam Mohamed Mahmoud led the community in a peaceful response when he urged the crowd to be calm and restrained following the attack.

All are welcome to join this British style summer street party combined with a traditional Iftar. The event aims to highlight some of the common British and Muslim values, like looking after ones’ neighbours and coming together in times of crisis. It will commemorate the incident but also celebrate our intermingled cultures and strong community spirit.

Imam Mohamed Mahmoud, from the Muslim Welfare House, said: “Our primary concern has been for the victims and their families who continue to deal with the consequences of this terrible attack. What was shown following that night is that these events bring out the best in all of us, as diamonds are only formed under pressure. We received outpourings of support from all over the world from people of all backgrounds who have the capacity to care for others whom they have had no contact with.

“It was a glimmer of hope after a bleak situation and showed the inherent goodness of the people of our nation and across the globe. Today we want to say thank you for that. We have a common cause; to stand on one footing for humanity, quality, justice and peace.”

Guests speakers will include:

Biryani, samosa, kebab, chickpea masala and dates will be served

An Iftar is the sunset meal which breaks the Ramadan fast each day. It is traditionally eaten within a large family or group gathering.

Foredul Islam, National Events Manager for Muslim Aid, said: “It was a terrible incident, but it was followed by amazing support and cohesion within the community, so it’s important that we appreciate and celebrate that.

“This event aims to be a fun and colourful summer street party combined with a traditional Iftar. We are really looking forward to sharing with neighbours who are of faith or no faith – bringing mosques, synagogues, churches together and local leadership. Islam is about sharing everything with your neighbours and Britain shows its true colours when everyone comes together.”

This event is also being supported by the Somali Association of Britain, Somali Welfare Centre, Islington Somali Community, Back 2 Basic Create and the Al Risala Mosque and the Holloway Education and Cultural Centre