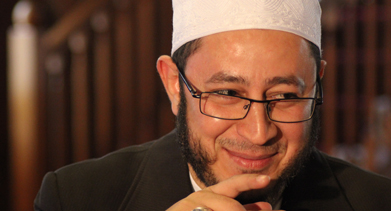 ONCE a hotbed of extremism, Finsbury Park’s towering red brick mosque opened its doors on Saturday to hundreds of local residents as part of a unique Celebrate Your Neighbour Day event. It was on the same day exactly three years ago that the mosque’s former fiery cleric, Abu Hanza, was jailed for seven years for preaching racial hatred and inciting his followers to kill non-believers. Much has changed since those dark days when Hanza held sway. For a start, the building in St Thomas’s Road is no longer named the Finsbury Park Mosque. Today it’s called the North London Central Mosque.

A new board of trustees and a new Imam, Ahmed Saad, have been busy building much-needed bridges to the community around Finsbury Park and Highbury. On Saturday Muslims and non-Muslims alike came to look around the four large prayer halls and wedding and conference hall, and learn about the mosque, built in 1988. More than 1,500 worshippers come to pray at various times each day of the week. Men and women, however, don’t pray together. Women have their own separate prayer hall. Mr Saad said he knew little of Hanza’s activities other than what was reported – he was not a member of the mosque at the time. “Today we fight extremism with balance and moderation,” he said. “We have rid the extremists by positive actions within the community. “No one is preaching extremism in our mosque any more. We work well with the local authorities like Islington Council and the Safer Neighbourhoods police.” The mosque is also involved in the London Inter-faith forum and Mr Saad is part of the local police community advice group. Is there a problem with Islamophobia? “It happens occasionally. I blame the media for often misrepresenting Islam. People see someone dressed differently and speaking Arabic for example and it can create antagonism.” The mosque has its own gym for young worshippers and a youth club as part of a programme to steer young Muslims away from hanging about on the streets. Like many who live or work in Finsbury Park, Imam Saad is only too aware of how dirty the area can become. The mosque has a plan. “We are going to have a clean-up day for the community on Saturday March 7,” he said. “About 50 young people in collaboration with the police and Islington Council will be picking up litter and getting rid of graffiti. Members of the community are welcome to join us on the day and they can contact me at the mosque.” Through the Association of Muslim Doctors, the mosque is also staging a Health Day for the community with free checks for blood pressure, diabetes and other common problems. Celebrate Your Neighbour Day was a resounding success, according to organiser Katherine Wratten. “Highbury Barn pub, for example, was packed with residents on Saturday morning enjoying free cake and coffee,” she said. “People knocked on their neighbour’s doors in Highbury to introduce themselves, many for the first time. I’d like to thank Islington Council for helping with the event and the Islington Tribune for promoting it. Having the mosque open on the same day has been the icing on the cake.”